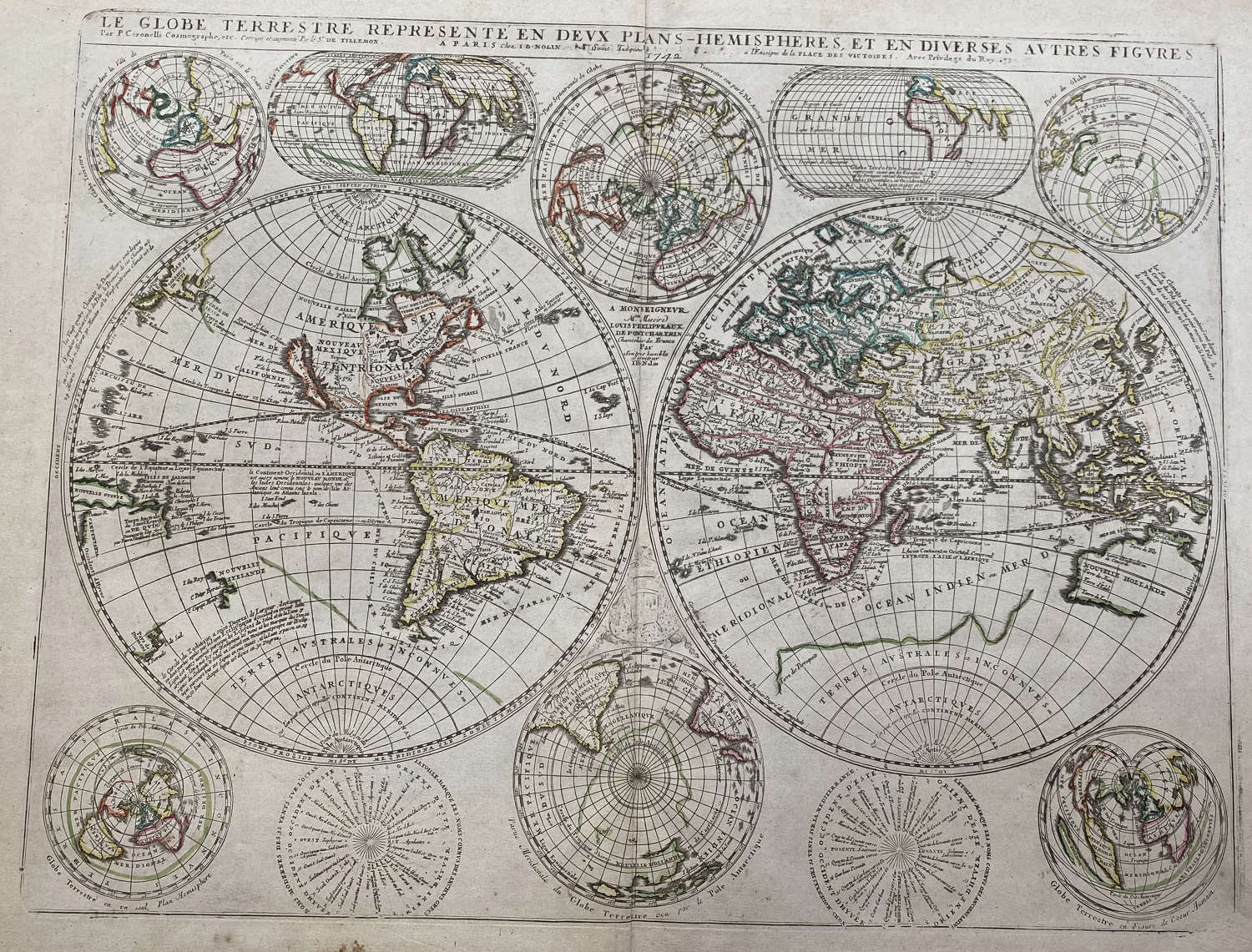 Copper-engraved double-hemisphere map of the world, surrounded by smaller hemispherical and oval maps, hand-colored in outline.

Significant world map at the end of the 17th century, with California depicted as an island, on the main map as well as three of the smaller maps. Australia is partially delineated, as also New Zealand, and above the island of California is a blank space, with Terre de Jesso to the west. Shirley describes the map, and its origins, at some length: "One of Coronelli's most active collaborators in France was the Frenchman Jean-Nicolas du Tralage, also known as De Tillemont. Information was exchanged between Coronelli and Tillemont and maps were published based on the acknowledged input of both parties. Such an example is their joint world map consisting of two main hemispheres and eight smaller projections. This was first published by Jean Baptiste Nolin in 1690 and would appear to pre-date Coronelli's own world map on two separate sheets in his Atlante Veneto. The geographical features generally follow those shown on Coronelli's globe of 1688, including the marking of the Mississippi. There are none of the interesting legends and vignetttes and naturally far fewer place names. However, the Solomon Isles have been included which were surprisingly omitted from Coronelli's predecessor map. The engraving is commendably precise and clear. Around the two main hemispheres are two smaller ones oriented on Paris and its antipodean opposite; north and south polar projections; one cordiform and two truncated oval projections; and two wind directional figures." This is the first state (of at least four) of the map, with the 1690 date present, and the dedication to Monsieur Louis de Boucherat.

A spectacular map of North America features California as an island on the Foxe model with two indented bays at top.

Burden states "Vincenzo Maria Coronelli's large two sheet "AMERICA SETTENTRIONALE", dated 1688, did not appear in an atlas until 1691, in the first edition of the "Atlante Veneto". It is possible that the map was made available before its inclusion. In 1689 with the agreement of Coronelli, Jean Baptiste Nolin published in Paris a reduced single sheet version. It incorporated all of the advances and introductions of the larger work. It is not an entirely slavish derivative as along the shores of Hudson Bay are new toponyms and the western side bears a legend describing "Fort Francois". Off the south-east coast and the Outer Banks is an erasure which is present on all examples examined. It most probably represents an error in production" (Burden). As with other maps published by Nolin recognition of some of the material is given to Jean Nicolas du Tralage, Sieur Tillemon, although not until the second state.

A note near the peninsula of Agubela de Cato speculates on the location of the Strait of Anian. The Mississippi River is located too far west, and it is flanked by a massive mountain range. The Great Lakes are shown quite accurately for the time, with Lake Ontario named Frontenac. The Chesapeake Bay is shown a bit too wide, and the fictitious Lake May is noted just south of the Appalachians.

A large title cartouche with a Native American and an European supporting urns and cornucopias from which money is pouring; symbols for mines, volcanoes, religious establishments, capes, keys, etc.

Coronelli, royal cosmographer of the Republic of Venice, visited Paris in 1681-3, where he had access to court documents including the manuscripts of La Salle. Upon his return to Venice in 1684, he founded a geographical society, which provided funding for his atlas, first published in 1690.

A fine example of Nolin's elegant map, compiled and engraved in Paris in collaboration with Vincenzo Maria Coronelli, who was then working in Paris on grand Celestial and Terrestial Globe for the King of France.

The cartographic content is largely identical to Coronelli's two-sheet map of Europe, which was likely issued shortly after Nolin's map. The map is beautifully engraved and exhibits the detail and fine craftsmanship which is characteristic of Nolin's work. This example, in full original color, is of particular note. Seldom seen on the market.

A very rare French map of Africa by Jean Baptiste Nolin (senior) after Coronelli. The map is largely identical to Coronelli's two-sheet map of Europe, which was likely issued shortly after Nolin's map.

Nolins's map of Asia based on Coronelli.

All maps are pressed and cleaned, original colours, strong and supple paper:

- North America - left margin (near California) small area of writing that is visible in the image. One inch repaired margin tear. 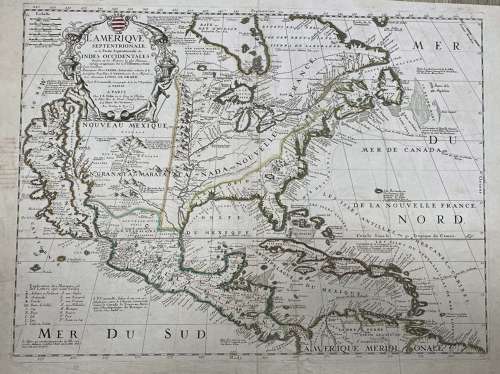 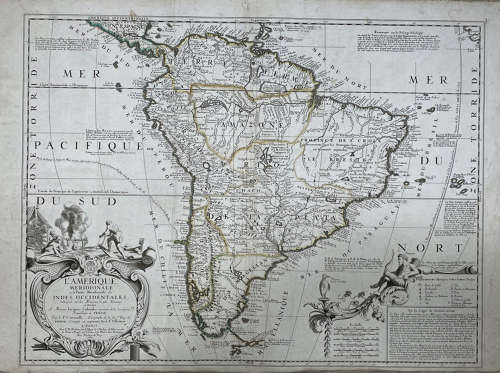 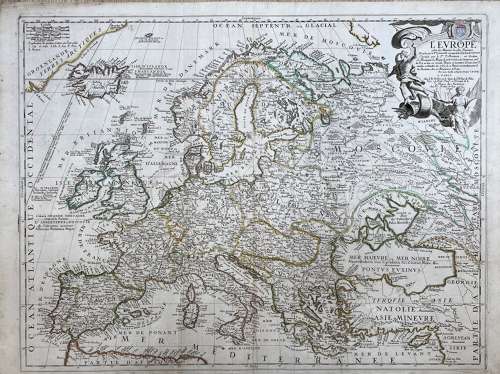 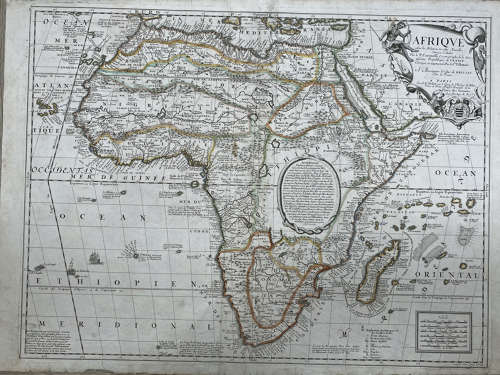 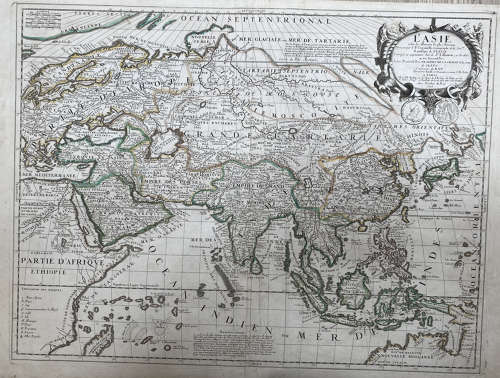