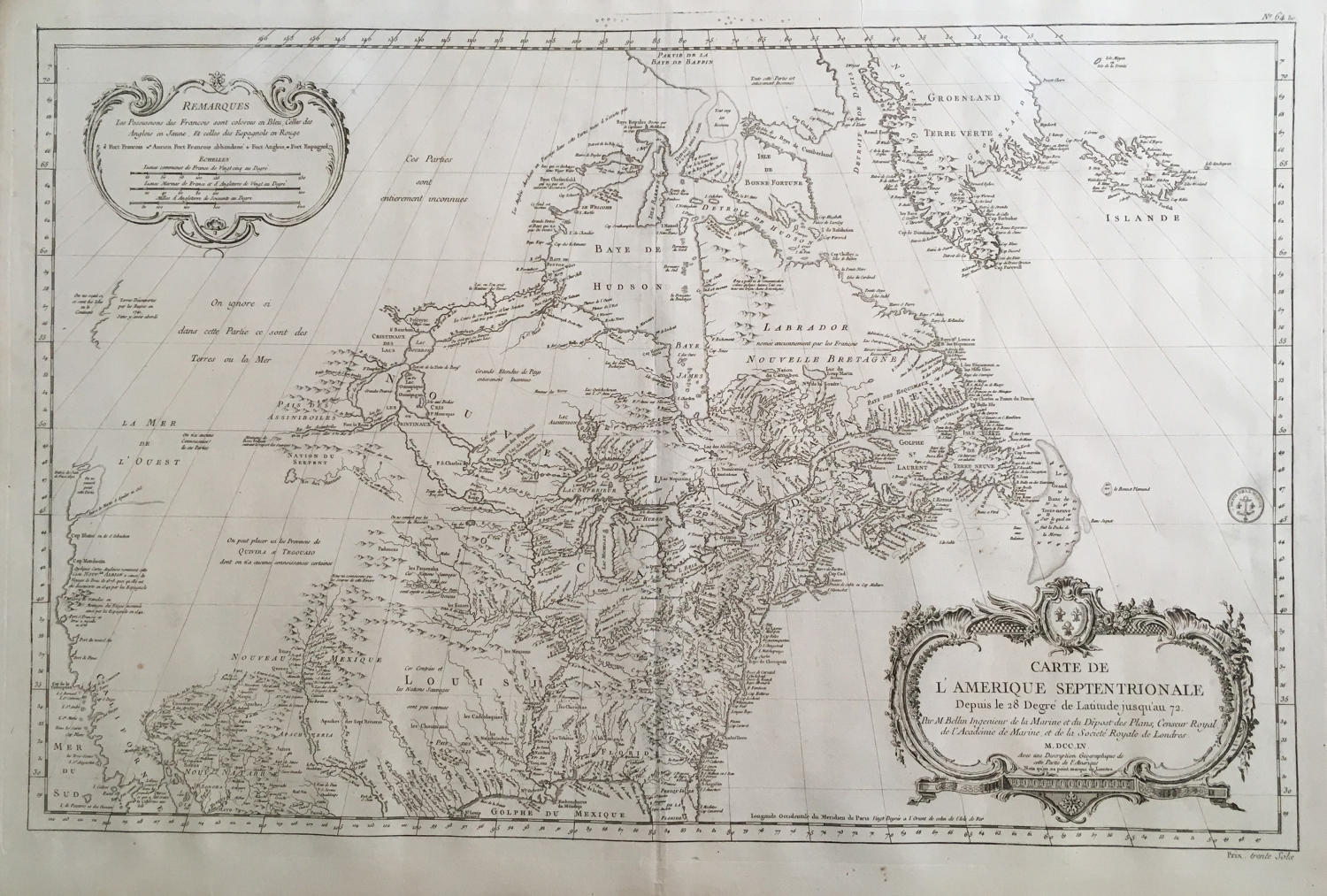 A large and rare map that covers nearly all of North America. The West is mostly blank, coastlines are only partially delineated, the Sea of the West (La Mer de l'Ouest) is named but not delineated. There is also a River of the West flowing westward from Lake Winnipeg but ceasing near the Montagne de Pierre brillante suivant le report des Sauvages (mountain of brilliant stones as reported by the savages). The names of explorers responsible for discoveries are noted along the coasts. There is good detail of rivers, lakes, Indian nations, and forts in the interior. The handsome chart is adorned with a large, beautifully engraved title cartouche and a second cartouche contains the legend and three distance scales. Seal of Dépôt de la Marine with prix trente Sols. A scarce map in remarkable condition.

Between 1731 and 1742 the French government sent Canadian-born Pierre Gaultier de Varennes, sieur de La Vérendrye, on several expeditions into western Canada to find a route to the Pacific Ocean. In 1739 La Vérendrye reached the Mandan villages on the upper Missouri (though he did not recognize it as the Missouri). In 1739 his son François explored the Saskatchewan River. François and another son, Louis, explored the area southwest of the Mandan villages to the Rocky Mountains.

The Vérendryes relied extensively on information obtained from maps made by the Cree and Assiniboine Indians. Like so many other explorers, however, they misinterpreted much of what they transcribed from the Indian maps. La Vérendrye came to believe that a River of the West connected with an opening on the Pacific coast discovered by Martin d’Aguilar in 1603. He also believed an inland sea called La Mer de L’Ouest was a receptacle into which the River of the West flowed. Unfortunately, neither the River of the West nor La Mer de L’Ouest exist. Likewise, La Vérendrye perpetrated a myth of a Mountain of Bright Stone, or the Montagne de Pierre Brilliante, from a misconception of information he received from Indians. Later, this name evolved into the Shining Mountains, as the Rocky Mountains were called for many years.

The maps and charts from the La Vérendrye expeditions were deposited at the French Dépot des Cartes et Plans de la Marine--the main depository of documents relating to French exploration in North America. Jacques Nicolas Bellin (1703-1772) was the senior hydrographic engineer at the Dépot. In addition to conducting seacoast surveys in France and throughout the world, Bellin made several maps of North America.

Bellin incorporated La Vérendrye’s results, including the "Montagne de Pierre Brilliante," in the maps he made for Charlevoix’s Histoire et description generale de la Nouvelle France (1744) and in the map on display. At several points on "Carte de l’Amerique Septentrionale" (1755) Bellin acknowledges the lack of geographical certitude about western North America. In a note near the "Riv. des Assiniboile," Bellin indicates that this river might flow into "La Mer de L’Ouest." Likewise, he suggests a possible connection between "La Mer de L’Ouest" and two opening to the Pacific Ocean--the "Entrée de Juan de Fuca 1592" or the "Entrée des Martin d’Aguilar en 1603." He depicts the "Riv. des Mantons" as a separate river and in another note indicates that it may be connected to the lower Missouri. Finally, the lower section of Bellin’s map borrows from maps by de L’Isle and Anville, although Bellin locates the source of the Rio Grande further south than de L’Isle. On Bellin’s map, the mountains of New Mexico form a southern range which is separated from the northern mountains by a gap.

In very good condition, with wide margins and a strong engraving.

Mapmaker: Jacques-Nicolas Bellin (1703-1772) was one of the most important and prolific French cartographers of the mid-eighteenth century, in the service of the French Hydrographical Office. He was appointed the first Ingenieur Hydrographe de la Marine, and also Official Hydrographer to the French King.

Bellin was responsible for an enormous output of charts and maps. In a large folio format, he issued a volume of sea-charts of France, the Neptune Francois, and several sea-atlases of the World, including the Atlas Maritime and the Hydrographie Francaise. These large charts were amongst the best of the period and continued being reissued throughout the second half of the eighteenth century. 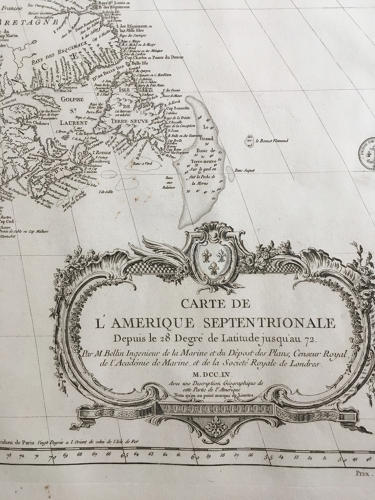 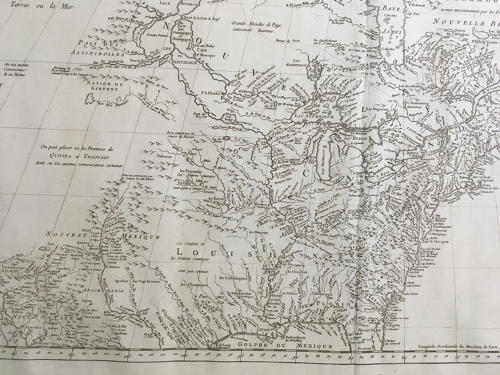 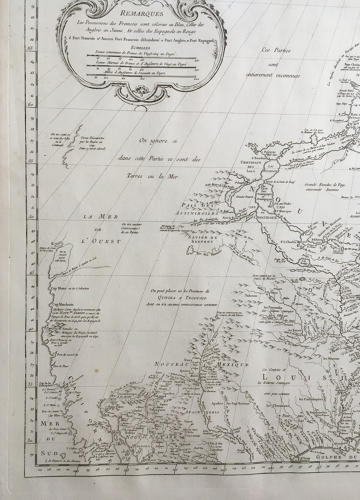